Free Shipping on Orders Over $100

Darts is a game that should be enjoyed by all, a sport that is thrilling to watch and a must have in any home. Here are 5 of the best family games to play that will get everyone fired up around the dartboard, cheering and involved in darts.

1. Round the Clock (Around the World)

The classic race from 1 to 20 around the dartboard. This game is simple, can be played by large numbers of people at once (as long as you keep track of where everyone is up to) and provides many laughs, cheers and anguishing defeats.

To play, simply take turns throwing your set of darts (3 darts) and hitting every number segment once on your way from 1 to 20. The player who puts the first dart into the 20 bed wins. A variation of the round the world (or clock) game. Starting at 20, work your way to 1, with one key difference. If you hit a Treble go down 3, if you hit a Double go down 2, if you hit the single go down just the 1. This makes for some really fast comebacks and when someone seems miles ahead, all of a sudden, they're back in the competition.

This game can either be played by two people versing each other or larger teams. A great game for the family especially if you use the Target Darts Counter and verse the DartBot!

The aim of the game is to 'take'/'close' the above numbers on the dartboard, and then continue to score from them. The player/team to get the highest score is the winner.

Each player/team takes turns throwing. (Three darts from a player is a 'turn'/'Inning'.) To take a number for yourself or your team, you must score three of a number. This can be accomplished with three singles, a single and a double, or a treble.

Once a player/team closes a number, he/they may score points on that number until the opponent also closes that number. Keep adding each additional hit to your total score.

This game is excellent with three or more people. You need to hit doubles only and involves some careful strategy.

To begin, each player gets a number from the dartboard by throwing at the board with their non-throwing hand. This simply adds to the randomness of the number you start with. If you miss the board, or hit a number already taken you simply rethrow. 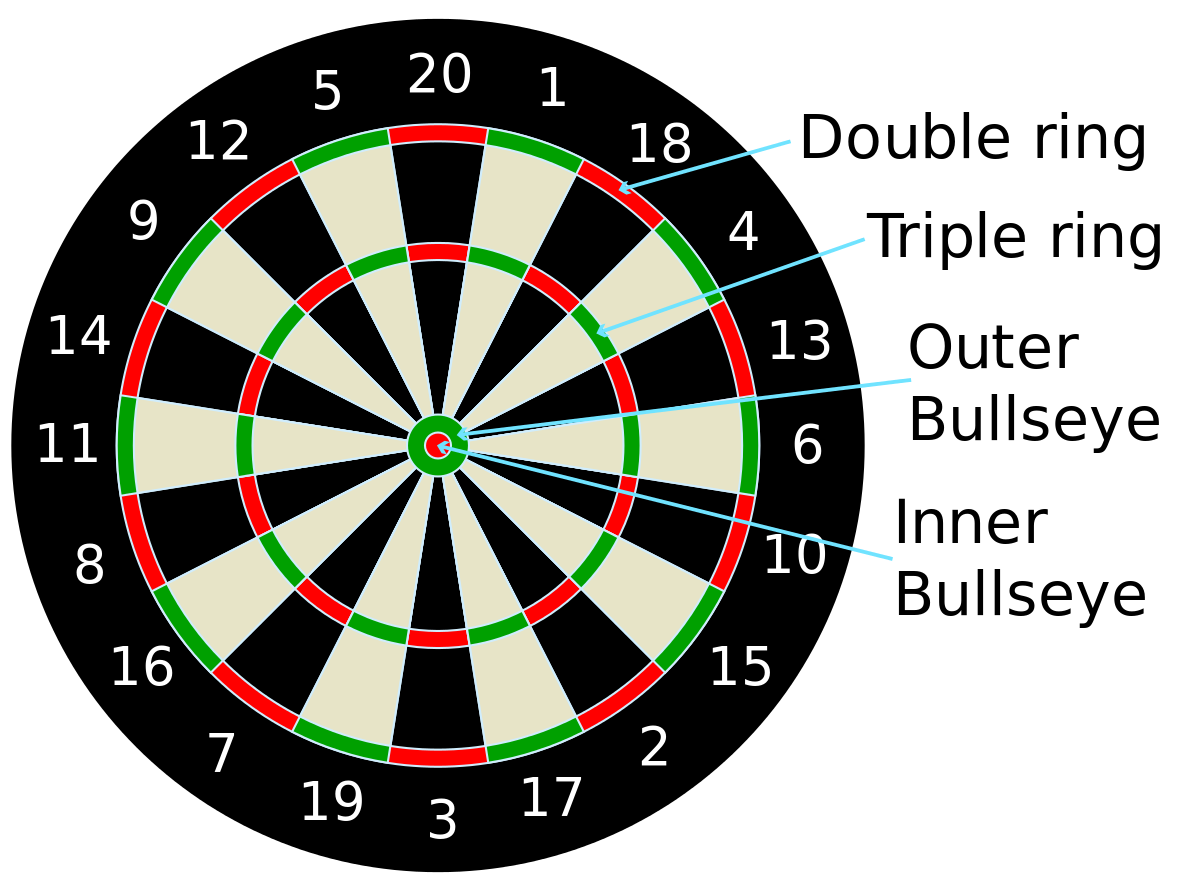 Now you will try to hit a double of that number (the outer band). When you hit a double of your number it makes you a “killer”. Now you can try to “kill” other players by hitting the doubles of their numbers. You get 3 lives. Every double hit after you become a "killer" takes away a life, even if you hit your own.

To make scoring easier, write each player’s name or initials in a column. Write each player’s number next to their name and add 3 circles for their lives. Put a cross in each circle when players lose a life. When you lose all your lives you are eliminated from the game and can no longer throw. The last person with lives remaining wins the game. This final game is great for any skill level, helps improve mathematical skills and is all about hitting the highest possible score in each turn. The more players the better, as it can be a quick game of elimination, or a huge battle of one upping each other.

To begin each player has 3 legs (lives). Write the names of the players on the Dartboard Cabinet whiteboard and add 3 “legs” (lives) with a stroke. Throw your 3 darts and call out the score. The following player must either equal or exceed your score. If they don't equal or exceed the score, that player loses a leg. You only need to beat the score of the player before you even if they didn't beat the player before them.

For example, if the first player throws 60, the second player must score at least 60. If the second player scores a 50, they lose a leg (life). Now the third player must meet or exceed 50. And so on. After each round make sure to change the order. We like to change the order to first out goes first next round, followed in order by those who got out after them or vice versa.

arrow_back Back to Our Blog

Free Shipping on Orders Over $100